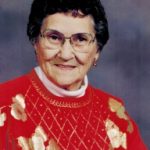 She and her husband made their home in Wyaconda, MO.

Lucille loved spending time with her grandchildren and making quilts.

She was preceded in death by her husband; three sons, Charles, Kenneth Jr. and Bobby Don; one granddaughter; one stepgranddaughter; three sisters, and seven brothers.

Funeral services will be held on Monday, October 28, 2013 at 2:00 p.m. in the Wyaconda Baptist Church in Wyaconda, MO with Brother Delbert Scobee officiating. Visitation will be held from 1-2 p.m. at the church prior to the service.

Burial will be in the Wyaconda Cemetery.

Memorials are suggested to the the Alzheimer’s Association or to the Clark County Nursing Home and may be left at or mailed to Gerth Funeral Service, 115 S. Main, Memphis, MO 63555.