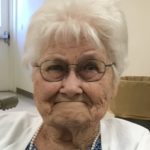 She was born the daughter of Ernest and Maggie (Beard) Tripp on April 2, 1926 at home four miles northeast of Knox City.

The Deatricks enjoyed 73 years of good married life. To this union was born David Glen of Columbia, Linda Ann Kaufman of Perry, IA, and Timothy Troy of Waukee, Iowa.

Dora Mae was a pastor’s wife and worked alongside her husband for over 50 years teaching Sunday school, Bible School, Girls’ Auxiliary and working in the kitchen at summer camp. She supported home and foreign missions as a member of WMU.

She loved family and said how thankful she was that her mother taught her how to work hard. Her hobbies included reading and tending flowers. Dora Mae raised a huge garden, as long as he could, to help feed her family. She loved to read and play Scrabble, and she had a soft heart for animals – especially cats. Even after she moved to the SCCC, she thought herself blessed to attend Sunday school and church at the Memphis Baptist Church. Her entire life, starting in childhood, was centered on being in church.

She is survived by her sons: David and the Rev. Dr. Timothy (Lisa) Deatrick; a daughter, Linda Kaufman; a sister, Ernestene Deatrick; seven grandchildren; a number of great grandchildren; and many nieces and nephews.