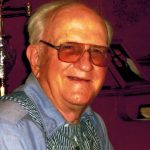 He was born the son of John J. and Lena Mae (Hawkins) Deatrick on May 27, 1923 at home on Deatrick Hill, south of Wyaconda. He grew up in the Liberty Baptist Church and was saved when he was 12 years old. Ernest graduated from Williamstown High School in 1943.

For years Ernest helped his father do carpentry work before being licensed to preach the gospel at Liberty Baptist Church, where he preached his first sermon. He graduated from Hannibal LaGrange College in 1957 and taught at Mt. Tabor school for one year. In 1958, the Deatricks moved to Kirksville where he served as pastor at Hamilton Street Baptist Church while finishing his degree at Truman State University. He also accumulated 35 hours of seminary work by correspondence.

Rev. Deatrick served as pastor at several Baptist churches in Northeast Missouri, including Pleasant Ridge, Bear Creek, Harmony Grove, Antioch, Mt. Zion, Arbela, Ballard, Hamilton Street, Memphis, Providence and Wyaconda. He was the moderator of the Macon and Pleasant Grove Associations as well as treasurer for the Wyaconda Lions Club.

Ernest was very faithful and enjoyed his work. He was known as a man who lived his beliefs by having a kind and generous heart. Ernest did his best to help anyone in need, day or night. Rev. Deatrick has a pastor’s heart and loved people; he preached over 2400 funerals and performed 240 weddings.

He is survived by his wife of the home; sons David Deatrick of Kirksville and Timothy and wife Lisa Deatrick of Waukee, IA; daughter, Linda Kaufman of Perry, IA; seven grandchildren; many great grandchildren; a sister-in-law, Ernestene Deatrick; many nieces, nephews and friends.

Funeral services will be held at 10 a.m., Saturday, April 16, 2016 at the Liberty Baptist Church south of Fairmont, MO with Tim and Dan Deatrick officiating. Burial will be in the Providence Baptist Church Cemetery in Williamstown, MO.

Visitation is from 2-7 p.m., Friday, April 15 at the Gerth Funeral Home in Memphis with the family present from 5-7 p.m.

Memorials are suggested to Hannibal LaGrange University and can be left at or mailed to the funeral home.