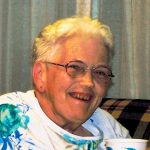 She was born the daughter of Charles William and Melba (Cain) Welker on December 31, 1941 in Kirksville.

She graduated from the Williamstown High School.

She was a devoted wife and mother. She enjoyed crocheting blankets for her children. Vera took pride in always being available to help wherever she was needed.   She and Bruce raised foster children in their home for many years.

Vera was a member of the Gorin Christian Church and the Jolly Workers Club. The Tagues were involved for many years in LICA (Land Improvement Contractors of America) and traveled extensively, including to Hawaii.

Visitation is from 12-7 p.m., Wednesday, November 2, at the funeral home with family greeting friends from 5-7 p.m.

Memorials are suggested to the Gorin Cemetery Association.