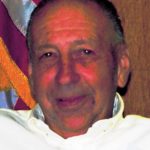 He was born January 2, 1939, at home in Tobin Township, Scotland County, Missouri, the only child of Francis Herman and Hazel Florine (Garrett) Forrester. He was the grandson of William Albert and Nellie Lee (Childers) Forrester and Ozro Clyde and Hazel Aleyne (Sweeney) Garrett.

Sterling attended and was a member of the Edinburg Baptist Church as a child. He was baptized into Christ on September 28, 1952 at the Memphis First Christian Church, where he later placed his membership.

He married the former Katherine Elaine Ewing, daughter of Clark Baldwin and Katherine Madeline (Monroe) Ewing, on December 5, 1964 at Pleasant Grove Baptist Church in Gorin. Sterling and Elaine made their home in the Edinburg community south of Memphis until moving to Memphis in 2017. She survives.

Sterling engaged in farming on the family farm. He also did custom hay baling, combining, and grain hauling across Scotland County in addition to row crops and livestock farming. Sterling enjoyed fabricating and designing farm implements from metal. His metal fabrication business was named Tobin Creek Experimental Manufacturing. He spent hours in his shop behind a welding helmet or with a cutting torch in his hand. He had a passion for “aged iron” as well as a deep appreciation for antiques and primitive farm collectibles, especially Oliver tractors.

He was a member of and currently serving as treasurer of the Leslie-Chambers American Legion Post #395 in Gorin, Missouri, and a 50-year member of Greensburg Lodge No. 414 Ancient Free and Accepted Masons. Sterling was a lifetime member and past president of the Scotland County Historical Society, past president of the Scotland County Antique Fair Association, and a lifetime member of the Bible Grove Historical Preservation Committee.

Funeral services are scheduled for 11 a.m., May 11, 2018, at the First Christian Church in Memphis, with Brother Jack Sumption officiating. Interment will be in the Edinburg Baptist Church Cemetery.

Memorials are suggested to the: Edinburg Church and Cemetery, the Downing House Museum Complex, and the Memphis First Christian Church.