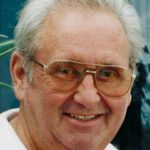 On January 20, 2022, at the age of 87, Ronald J. Klem of Memphis went to join his son Chad and his parents Earl and Helen in heaven. After several years of declining health, Ron passed peacefully with his beloved wife Millie “Minner” at his side.

Ron was born in Rochester, New York on November 25, 1934, to father Earl “The Duke” Klem and mother Helen “Beanie” Klem. The oldest of six children, Ron formed his devotion to family and developed his work ethic at an early age. He helped his father with the family business starting at the age of 11 in 1945 and continued through 1952 in Rochester, New York. He then served his country as a Heavy Equipment Operator in the US Army. His service to this country was cut short because of a serious injury he suffered while serving in France.

After returning to the states, he went to work for SCM Corporation as a technician. A job he loved and never fretted having to go to work. After several mergers and acquisitions, Ron retired from 3M Corporation after a 30 year career due to some health issues he was experiencing.

Work wasn’t all Ron enjoyed. He met the love of his life Millie in 1962 on a blind date setup by his sister, Dianne. It must have been meant to be because that relationship resulted in a 58 year marriage that produced 4 boys who gave them 5 loving grandchildren. Family was everything to Ron. There wasn’t anything he wouldn’t do for his family. He often spoke fondly of the memories he had of his parents and siblings. These relationships and memories formed the foundation of who of who Ron was as both a husband and father.

He was a devoted husband and the perfect example to his sons. His work ethic and devotion to those he loved was always forefront in all his actions. A true role model that was not fully appreciated by his son’s until later in life. Now we all just want to live up to his example. You often hear about people who would give you the shirt off their backs. Ron was that person. He was selfless and always had time to help a friend. We love him deeply and miss our husband, father, grandfather and friend.

Ron loved watersports, including watersking and sailing with his brothers Bob, Dan and Pete, special hotdogs called pork-hots from Rochester, New York and a card game called Euchre were enjoyed by most of the family.

Ron was in the Clark County nursing home for the past 5 years and interacted with the staff. The loved teasing each other. There was that special relationship between Ron and the girls. We will miss Ron deeply, but we will remember him daily with fond memories.

He was preceded in death by his son, Chad, and his parents, Earl and Helen.