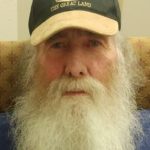 Education fund for Madax Julian,
in care of Amber Allen

He was born the son of Harvey Junior and Darlene Labay (Smith) Allen on October 6, 1949 in Fairfield, Iowa. The family moved from Iowa when Rick was an infant, settling on a farm west of Bible Grove.

Rick and his sister, Jeanie, grew up helping on the farm and building their sibling relationship into a strong bond of admiration and love. He was in charge of chores during the week while his father was working, forging a strong work ethic, a spirit of independence, a sense of neighbors, and fuel for some of the best and most entertaining life stories.

He attended grade school in Bible Grove, then went to Downing High School until it burned down in 1965. Rick graduated from Lancaster High School in 1967.

Rick joined the United States Army, serving from December 4, 1969 until November 1, 1971 as a sharpshooter. He was stationed in Korea with the Eighth Army.

He graduated from Quincy Technical School, where he became proficient in welding, auto body painting, and restoration. Rick drove coast to coast as a truck driver, which added to his expertise and character – creating more stories of adventure.

Rick married the former Ann Townsend on January 20, 1973 and they lived in New Mexico. They returned to the Kirksville area when their daughter Amber Melody Allen was born on June 16, 1979. He treasured the time he could spend with Amber, especially when she introduced him to his grandson – Madax. Those close to him could see the love and joy this little man brought.

Rick retired to his farm in Bible Grove where he raised cattle. He spent most of his time in his deer shed with his beloved dog, Molly, or in his El Camino of which he was very proud. Rick was an avid outdoorsman, and his skills in hunting deer, turkey, Indian artifacts and five-gallon buckets of mushrooms would qualify him as an expert tracker, marksman, and the “whisperer of many animals.”

He was often called the “Grizzly Adams” of the area, his gruffness never fooled many for long. Children enjoyed being around him and he easily shared his knowledge.

Though his body began to weaken and he was weary, the pictures and smiles of Madax brightened his spirits.

With a dry sense of humor and a quiet spirit, Rick will be missed by those who knew him and valued his wisdom. Though he is no longer suffering in this world and no one could wish him back to his pain and suffering, those who loved him still find it hard to say “Goodbye”.  So, borrowing from the best of his quotes, to Rick we will just say — LATER!

He was preceded in death by his father and a nephew, Travis Bissell.

He is survived by his daughter, Amber, of Pompano Beach, FL; mother, Darlene Allen of Bible Grove; sister, Amanda Jean (Boyd) Bissell of Memphis; and grandson Madax Julian of Pompano Beach; a nephew, Marcus Jenkins and family; many friends and neighbors of the Bible Grove community.

Funeral services will be at 3 p.m., Sunday, October 22 at the chapel.

Burial, with military rites performed by the Wallace W. Gillespie Memorial V.F.W. Post #4958 of Memphis, will be in the Memphis Cemetery.

Visitation is prior to the service, from 12-3 p.m., on Sunday at the funeral home.