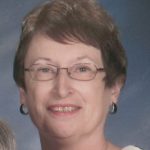 Reva Darlene Triplett, 74, of Memphis died Wednesday, June 16, 2021 at Scotland County Hospital after a short, but intense, battle with cancer.

She was born the eldest child of Richard Theodore and Cleta Mae (Dochterman) Kraus on October 22, 1946 at her paternal grandparents’ farm southwest of Arbela.

Reva grew up with her two brothers on the family’s livestock and crop farms north of Arbela, and later, just north of Gorin. She attended the Plum College country school, north of Arbela, in the early years of her education. Reva later enrolled at Gorin Elementary and Gorin High School, graduating in 1964. Music and band would become important aspects of her school years.

She then completed coursework in business studies at Gem City College in Quincy.

Reva married Lonnie Dee Triplett (son of Gerildive and Marguerite Riddington Triplett) of Rutledge on April 2, 1967 at the Arbela United Methodist Church officiated by the Rev. Barbara Barnett. Lonnie was the love of Reva’s life. He preceded her in death on September 19, 2020 after a 13 year battle with cancer. She was his main care giver the entire time.

Reva and Lonnie were blessed with two sons and three grandsons.

She will be remembered as a generous, kind-hearted and loving person by all that knew her. Reva believed in the importance of faith, character, family values, education and hard work.

Reva was a life-long member of the Arbela United Methodist Church who worked tirelessly to maintain the church and its ideals. She taught Sunday school and played the piano every week for years. Reva served on church boards and organized countless events and fundraisers during her time of service to the church. Her faith and church continued to be the ultimate force in her life to the end.

She and Lonnie were strict, but fair with their boys’ rules of conduct. “Remember who you are” was a common instruction before her teenage boys (and sometimes their friends) left to go out on weekends. She somehow always knew of any mischief they had gotten into before they even got home.

Reva loved her grandsons so much. She would always be thinking of gifts, projects, events, and trips to make memories with them. Reva supported her sons and grandsons’ education and activities. She was so proud when they received diplomas and degrees.

Reva was a volunteer 4H leader for years. She had been active in the Rutledge School Restoration Society recently.

She worked several part-time jobs as a young mother, including teaching music at the Rutledge School, giving piano lessons, baby sitting and working at the Rutledge Post Office. As her sons got older, she worked for the USDA in Memphis and in banking. She retired from the Community Bank of Memphis in 2013.

She was preceded in death by her husband, Lonnie; parents; parents-in-law; grandparents; brothers-in-law, Russell Fulk and Lynn Triplett.