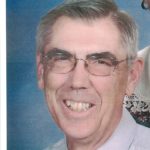 He was the first-born of four children to Andrew Gerildive and Marguerite (Riddington) Triplett. He was welcomed into this world on February 27, 1946 at the Kirksville Osteopathic Hospital in Kirksville. He grew up with his younger siblings — a brother and twin sisters.

Education for Lonnie and his younger siblings began at the little country school called South Liberty, just up a lane or two from their home place. Story has it their dad, Gerildive, built a little covered wagon at the top of the hill where they piled into the “bus” and rode down the mud road to the schoolhouse. Lonnie and his schoolmates transferred to the Rutledge school at the beginning of the fourth grade. After successfully completing his 8th grade, Memphis High School found him excited to be enrolled in agriculture and FFA. He and his brother helped their father with the dairy farm before and after school.

Lonnie married the former Reva Darlene Kraus on April 2, 1967 at the Arbela United Methodist Church in a ceremony officiated by Rev. Barbara Barrett. She survives.

The Tripletts became the proud parents of two sons and were blessed with three grandsons.

As a baptized member of the Arbela United Methodist Church, Lonnie has helped keep the church operating and in good spiritual health for 50+ years. His leadership can be seen in the many areas of not only the Arbela United Methodist Church but also in the Scotland County Parish, a group of three small country churches. He followed John Wesley’s quote for a successful life, “Do all the good you can, by all the means you can, in all the ways you can, at all the times you can, to all the people you can, as long as ever you can.”

During the challenges the 1960s era of rioting in our country, Lonnie actively supported and marched with the Missouri National Guard, where he served state-side for over 6 years, training as a heavy equipment maintenance mechanic. He was employed with the Missouri Highway Maintenance Department for over 40 years, advancing to area supervisor seven years prior to his retirement. He was hired by MO Dot in May 1964, the year he graduated from Memphis High School. He took time off from the job to join active duty with the National Guard and came back to his job with the department, retiring in October 2004.

Lonnie has been active in the Rutledge School Restoration Society, which is working to restore the 1912 Rutledge School building. While his sons were attending and graduating from Rutledge Elementary School, he served several terms on the Rutledge School Board. He enjoyed volunteering as a 4-H leader for many of the outdoor projects. Having a small farm on the outskirts of Rutledge when his boys were in 4-H, he encouraged animal husbandry where sheep, cattle and poultry were raised. He never ceased to be proud that both his sons earned a degree in agriculture from Missouri universities.

Lonnie will be sadly missed by all those who had the opportunity to get to know him.

He was preceded in death by his parents; parents-in-law, Richard and Cleta Mae Kraus; grandparents; brother, Evert Lynn; and brother-in-law, Russell Fulk.