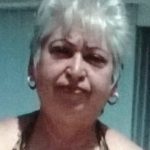 She was born the daughter of Joseph and Virginia (Toscano) Petrisch on December 22, 1945 in New York City, NY.

She married Garland Ray (Dale) Brock on May 26, 2005 at the Scotland County Courthouse. He preceded her in death on September 7, 2014.

Pat worked as a secretary and bookkeeper at the Gorin R-3 School. She had many hobbies and interests, including: karaoke, bingo, shopping and crossword puzzles.

She just enjoyed people, including the children from the Gorin school. Pat also had a fondness for animals, including her dog, Coco.
She was very patriotic. Pat was a member of the Am vets Post 50 Women’s Auxiliary, 3rd Vice. She worked with many V.F.W. and American Legion posts in the Margate, FL, area.

She was preceded in death by her husband; parents, several sisters and brothers.

She is survived by her sons: Kevin Nicholson of Great Mills, MD, and Francis Nicholson, Jr., of Gorin; grandchildren: Rebecca and Michael Nicholson of Great Falls and Frankie Nicholson of Florida; several sister and brothers; a special friend, John Heckerman of Gorin, whom she affectionately called “John Boy”; along with a host of friends from the Gorin area.

A visitation in Patricia’s honor was held on Sunday, July 5 at the Gerth Funeral Home. Private comital services will be held in Kansas at a later date.