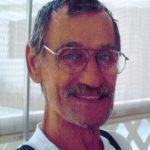 Dale moved to Gorin in 2005, and on May 26, 2005, he was married to Patricia Petrisch , his companion since 1988, in the Scotland County Courthouse by Judge Karl DeMarce.

Dale enjoyed fishing and playing cards and games. Most of all he enjoyed spending time with his family and friends.

Preceding him in death were his parents and one brother, Edward Brock.

A family Celebration of Life will be held at a later date in Florida.

Memorials in memory of Dale Brock may be made to Hospice.