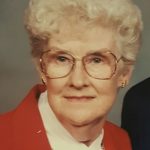 She was born the daughter of Leroy and Cecil (Jackson) Smith on September 11, 1927 in Arbela.

Norma suffered from polio as a child and through determination to walk again, was able to play basketball in high school. That dedication of purpose was a hallmark of her character. She graduated from Granger High School in 1945. Norma looked forward to attending the annual alumni banquet, which she did even this past year.

They settled north of Arbela before moving to Memphis in 1965 when they purchased the Super Saver, which Junior ran until 1972. Norma was the treasurer for the city of Memphis for 20 years. She belonged to the V.F.W. Ladies Auxiliary and the Eastern Star. Norma was an avid bowler and won several trophies. In her spare time she collected antique china, cooking, enjoyed gardening and working with her flowers. Norma treasured spending time with her family.

Norma was a long-time member of the Arbela Baptist Church.

She was preceded in death by her parents, husband, a sister-in-law, and two brothers-in-law.

Memorials are suggested to the Mt. Moriah Cemetery or the Arbela Baptist Church.