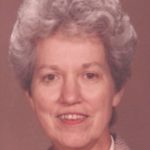 She was born the daughter of George Edgar Leslie, Jr. and Nanny (Moore) Leslie on November 21, 1921 at her parent’s home in Memphis.

Nancy was a member of the Chi Omega Sorority in college and played the cello in the orchestra. She was involved in many community activities after she and Charles settled in Memphis including: scouts, Sunday and Bible School, the community theater, community choir and playing the piano at nursing homes.

She was the organist at the Memphis First Baptist Church and played for many weddings and funerals. She also played cello in a local group.

Nancy was a member of P.E.O.

She worked at Harris Motor Company, was a substitute teacher, taught business classes and band at the high school.

The Harris’ loved traveling internationally with friends and through many states to see their grandchildren. Through her 100 years, she was a loving daughter, sister, wife, mother, grandmother, aunt and friend. She was beloved by all.

She was preceded in death by her husband; parents; sisters and brothers-in-law: Lucy and Don Bruner, Lillian and Joe Lewis and Mary Louise and Clyde Brown; a daughter-in-law, Louise (Daniels) Harris; sister-in-law and brother-in-law, Ruth and Tom Myers, and a grandson, Andrew Scott Miller.