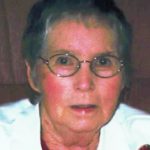 She was born the daughter of Charles Russell and Velma Gertrude (McVeigh) Rhodes on January 23, 1935 in Keokuk, Iowa.

She was a long-time custodian at the Scotland County Care Center and also cleaned homes in the area.   Marieta enjoyed walks at night and collected bells.   She was a member of the Memphis First Christian Church.

She was preceded in death by her husband; parents; several brothers and sisters; one grandchild; a son-in-law, Larry Miller.

Memorial services will be held at 11 a.m.,  Friday, October 27, at the Gerth Funeral Chapel in Memphis with Jack Sumption, pastor of the Memphis First Christian Church officiating.   Inurnment will be in the Memphis Cemetery.

Visitation is prior to the service, from 9-11 a.m., on Friday at the funeral home.

Memorials are suggested to the Alzheimer’s Association.