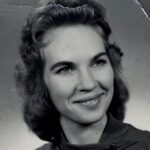 At a Later Date

She was born the daughter of Robert James and Imogene Faye (Dunlap) Peterson on August 1, 1944 in rural Scotland County.

Judy worked on the farm with Robert, owned and operated a café in Gorin and worked as a reflexologist. She was not a stranger to anyone and a friend to all the children in the neighborhood. Judy was artistic, enjoying drawing and ceramics. She will be missed by many.

She was preceded in death by her husband; parents; brothers: James and Albert; a sister, Roberta Mathes; and a nephew, Kyle Peterson.

She is survived by her brother, David (Jackie Small) Peterson of Memphis, daughters, grandchildren, several nieces, nephews, cousins and friends.