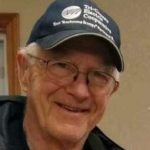 He was born the son of James Milton and Roberta Eileen (Bone) Fishback on March 31, 1943 in LaBelle.

Jim graduated from Hannibal High School and attended two years of college. He went to work for the United States Postal Service in 1966, eventually becoming post master at several post offices. He retired in 2003.

He married the former Janet Elaine Gooden on March 15, 1986 at the Barker United Methodist Church. She survives.

Jim’s hobbies included hunting and fishing, clearing timber, riding his ATV or using his little tractor. He enjoyed classic cars and coins. Jim was a bowler, and was active with his father in leagues and tournaments. He followed football, basketball, golf and the Olympics on television.

Jim was a 32nd degree Scottish Rite Mason with the Valley of St. Louis and the Orient of Missouri. He was a member of the St. Johns Lodge #28 AF& AM of Hannibal.

The Fishbacks were members of the Barker United Methodist Church.

He was preceded in death by his parents and a sister, Penny Mudd.