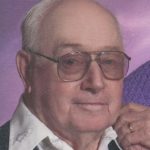 He was born the son of Arthur Glen and Verna Lucille (Chancellor) Woods on December 10, 1923. Ivan and his siblings were born and raised on the family farm at the south end of Miller bottom. He attended grade school at Oak Forest Country School.

He was inducted into the United States Army on February 18, 1943 at Fr. Leavenworth, KS, during World War II and served with the 757 Tank Battalion in the European Theater – first in Africa and then in Italy, where he was wounded on the French border on June 1, 1943. He was awarded a Purple Heart for his injuries sustained in battle, along with European African Middle Eastern Theater Ribbon with two bronze stars, a World War II Victory Medal, an African Theater Ribbon and a Good Conduct Medal. Ivan was honorably discharged on November 10, 1945 at Ft. Knox, KY.

Ivan followed the wheat harvest with his brother and cousins after he left the army.

Ivan married the former Jeannetta Lee Morrison on December 21, 1947 in a double-wedding ceremony with his cousin, Paul, and his bride, Shirley Chancellor, at the Richland Baptist Church. Jeannetta preceded him in death on May 13, 1993.

To this union eight children were born: Paul, Bonnie, James, Randy, Charles, Hollis, Kevin and Gaylene. The Woods family lived on his grandfather’s (Stacy Woods) farm, south of Crawford where Ivan farmed, drove the school bus for 15 years and worked at Scotland County Hospital as a custodian for over 10 years. In his spare time he mowed yards and cemeteries until Memorial Day 2020.

Ivan married the former Virginia Marybelle (Chambers) Heckethorne on April 5, 1997. They resided in Memphis. She survives.

He was a proud, lifetime member of the NRA.

On August 16, 2014 Ivan flew his maiden flight on a commercial airline (Southwest) while traveling with the Great River Honor Flight #26, with his daughter, Bonnie, as guardian.