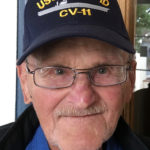 Edward Eugene Howard, 96, of Granger died unexpectedly at his home on October 20, 2020.

Eugene was born February 5, 1924, the son of Eddie Guy and Loreita (Lancaster) Howard in rural Scotland County on a day when snow drifts were as high as fence tops. He attended Gorin schools. He and his brothers drove all the way to Colorado in a Model A to work the annual peach harvest. He proudly served his country in WWII as a US Navy fireman on the aircraft carrier USS Intrepid in the Pacific theater. He lived through a kamikaze crash on the ship which killed 69 seamen just a couple of decks above him. After the Japanese surrendered, he got to explore the streets of Tokyo. He had many fond memories of his time in the Navy. He was honorably discharged on April 6, 1946. For his service, Gene was awarded an Asiatic Pacific Ribbon with 3 stars, an American Area Medal, and a Victory Medal.

Farming was all he ever wanted to do, so upon his honorable discharge in 1946, he got right to it. He started with a team of horses and a small tractor and two-bottom plow.

He married the former Wynona Bourn on Easter Sunday, March 28, 1948 at the Memphis United Methodist Church just before the holiday service. She preceded him in death on April 2, 2012.

To this union two children were born, Sherlyn and Denise. They spent their lives working hard on their farm near Granger, raising some of everything: corn, soybeans, wheat, beef and dairy cattle, hogs, chickens, and even a few sheep. He continued actively farming, raising cattle, and fixing fences until age 88 when one day an angry cow charged at him and all at once he was done with them.

In 2016, Denise and her husband Michael Belef escorted him to New York City to visit his old ship the Intrepid, exactly 70 years since he was last aboard. The staff treated him like a king for the day, and some visitors even asked for his autograph as a genuine WWII Intrepid veteran. He was interviewed for he Intrepid Museum’s living history project. In his later years he enjoyed going to the casino to play slot machines. His happiest casino memory was when he hit a $2000 jackpot.

He lived to 96 1/2 on his own terms, still living at home, eating what he wanted, keeping his own schedule, paying his own bills, hanging his own laundry on the line, and enjoying sitting outside with his cats on sunny days, right to the very end. He made a point to vote in every presidential election and wanted to tell everyone that he served in WWII so we could continue to have that right to choose our leaders today.

Eugene was preceded in death by his parents, brothers Leland and Harold, sister Arlean Berry, and wife Wynona, who passed in 2012. He was the last of their generation on both sides of their family.

He is survived by his two daughters, Sherlyn Howard of St. Louis, MO, and Denise Howard (Michael Belef) of Santa Clara, CA, many nieces and nephews, and some special neighbors who were like family: Harold and Marvis Trump, and Ralph Wittenberg and Shelly Lipper.