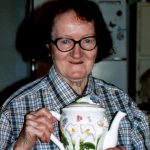 Wynona attended elementary school at the Price School of rural Gorin.  After graduation from Gorin High School in 1945, she earned a business diploma from Gem City Business College in Quincy, Illinois.  She had a grand driving tour of the American West with her family in 1947; saw the California Redwoods, the Golden Gate Bridge and Pike’s Peak.

Wynona worked on their farm and had a thriving business of her own tending as many as 1000 hens and selling the eggs to countless local people and businesses for many years.  After retiring from her egg business, she took great joy in attending antique shows and farm auctions, and especially in quilting.  She created many perfectly-stitched sets of beautiful quilt blocks, which her family enjoys as her legacy.

Wynona was preceded in death by her parents, and brothers Boyd and Charles Bourn.

Wynona is survived by her husband of 64 years, Eugene, her daughters Sherlyn and husband Ted Palmer of St. Louis, Denise and her husband Michael Belef of Santa Clara, California, sisters-in-law Ann Bourn of Gorin and Arlean Berry of Seattle, Washington, and many nieces and nephews.

Funeral services are at 1 p.m., Thursday, April 5 at the Gerth Funeral Chapel in Memphis with Homer Poor, pastor of the United Methodist Larger Parish of Scotland
County.   Burial will be in the Gorin Cemetery.   Visitation is prior to the service on Thursday, from 11 a.m. to 1 p.m.

Memorials are suggested to the Gorin Cemetery.