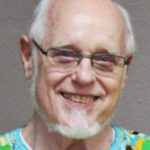 He was born August 14, 1935 in Chicago, Illinois. He traveled the world, making stops in London, Accra, Lagos, Beirut, Jerusalem, Athens, Rome, Paris, Nairobi, Cape Town, Cairo and Madrid. Most people visit as tourists, but Ron was motivated by desire to spread the Good News.

Ron was the younger of two children and grew up in Hammond, Indiana. While a high school student he was greatly influenced by BW Carrier, the minister at Hessville Christian Church. Mr. Carrier was a Christian scholar who accepted no divergence between the two words.

Ron attended Minnesota Bible College in Minneapolis and while there married the former Doris Singleton, a nursing graduate from Gary, Indiana. She preceded him in death on April 12, 2020.

Both shared the central belief that Jesus is the Christ, and by relying on that ideal were led on improbable lives of family, travel and adventure.

Ron began service as an elementary school teacher and principal in Lake County, Indiana. In 1966, Ron was contacted by former classmates and professors asking for his educational expertise in helping establish Ghana Christian College in Accra, Ghana.

After successfully setting up the educational programs for the college and acting instrumentally in purchasing the first campus, Ron, Doris and family returned to the United States where Ron completed his doctorate at Indiana University-Bloomington. While a student at IU, Ron also served full time with Ellettsville Christian Church as education minister.

During this period Ron and Doris were contacted by Paul Carrier, son of BW about moving to Dallas, Texas to serve as academic dean of Dallas Christian College in Farmers Branch. They accepted the challenge and moved with their family to begin additional service in education. While at DCC Ron was instrumental in achieving improved accreditation status as well as expanding curricula and educational programs in cooperation with other Dallas county institutions.

For several years Ron returned to public education and served as an administrator with the Dallas Independent School District, including several years as principal of Charles Gill elementary school.

Upon reaching the “golden years” of life that most spend in retirement and relaxation, Ron and Doris returned to Accra in 1996 to assist in the development of a new campus for Ghana Christian University. During the next dozen years the campus was completed and additional programs were implemented with Ron’s guidance.

He was preceded in death by his wife, Doris.