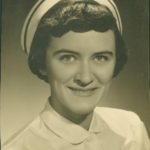 Doris Marie Rife, 84, of Dallas, TX, died April 12, 2020 in Dallas.
She was born July 16, 1935 in Gary, Indiana. Doris was the oldest of six siblings and during her early years was called upon to ‘parent’ some of the younger children due to her mother’s extended absence from the household while recovering from tuberculosis.
Her experiences during this period undoubtedly contributed to Doris’ exceptional lifelong ability to organize and lead as well as inspiring her interest and insistence upon always helping others.
Doris attended nursing school at St. Mary Mercy hospital in Gary where she received her RN in 1956. Shortly after graduating she married the love of her life, Ronald Rife and they commenced their improbable lifetime journey of family, travel and adventure.
After three children and ten years of marriage Doris felt the call of Jesus Christ for her family to relocate to Ghana, West Africa where she assisted Ron as he helped establish Ghana Christian University College. Her nursing skills were valuable in teaching health classes as well as in protecting the lives of her family through several years dodging the ravages of malaria, cholera, dysentery and hepatitis.
The second decade of marriage included this life in Ghana, along with travels throughout the rest of Africa, the Middle East and Europe after which Doris and family moved to Farmers Branch, Texas. Her beloved house on Lavita Lane became the new focus of her fellowship of family and friends as she finished raising her last child then gladly proceeded to assist with her growing brood of grandchildren.
The ‘golden’ years of life that most spend in retirement and relaxation, Doris spent in returning to Ghana with Ron to assist in the development of a new campus for Ghana Christian University College. During the next dozen years her additional junkets to numerous locations across Africa and Europe held little interest for her compared to those regular short visits back to Texas and the chance to see her family.
Doris is survived by her husband of nearly sixty-four years, Dr. Ronald Rife, of Dallas; three children; eight grandchildren and eight great-grandchildren. She is also survived by four sisters.
A gravesite service will be 2 p.m., Saturday, April 18, 2020 at the Downing Cemetery with her husband’s family.