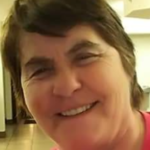 She was born the daughter of Ralph Joseph Kaiser and Doris Louise (Reck) Harding on June 16, 1953 in Chicago, IL.

Diane was a devoted member of the Church of Jesus Christ of Latter-Day Saints since 1992. She enjoyed serving in Relief Society, living the gospel and telling others of her love of our Heavenly Father. Her proudest moment was being sealed to her husband at the Nauvoo Temple in 2014.

Diane was a quilter who loved the Lord first and foremost followed by her family. She enjoyed crocheting, sewing, canning, genealogy and making charitable contributions.

She was preceded in death by her parents; aunts and uncles: Fern and Earl Eason, Elaine and Al Race; and a father-in-law, Clarence Richard Snyder.

She is survived by her husband, Jerald, of the home; children: Jason (Amanda) Snyder of Rutledge, Clarence (Lacie) Snyder of Memphis; Stacy (Mike) Easton of Seymour, IA, Christopher Snyder and girlfriend Jamie of Iowa City, and Karl Snyder of Memphis; grandchildren: Arysta, Matthew, Cheyenne, Hailey, Brittney, Chandler, Brandon and Serenity; brothers: Wayne and Norman Kaiser and Mark Wiater; many family and friends who will cherish her memory.