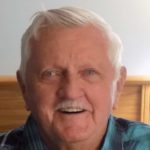 He was born June 11, 1942 in his home in Arbela, MO, the son of Ora Earl Armstrong and Margret Ann Wright. Dallas was the youngest of 14 children.

He graduated from Wyaconda High School in 1960 and spent the majority of his life in Scotland County.

Dallas worked various jobs in his earlier years in the Memphis area including carpentry work for Jack Danenhauer and was known for years as the “propane gas man” while working for Eager’s, Simpsons and Tippetts. In later years he drove a semi-truck over the road traveling the lower 48 continental states, eventually retiring from Midwest Fuel.

Dallas was an accomplished woodworker, building dollhouses, replica farm buildings and was always up to the task of helping friends and family with projects. He loved country music, bluegrass music, traveling and was an avid reader. At 78 years old, he finally gave in to the world of technology and learned Facebook which allowed him to stay in contact with family and the ability to find long-time friends.

He enjoyed fishing and camping.

Dallas will always be remembered by his big warm bear hugs, his twinkling blue eyes, his quick wit and his love for babies especially his grandbabies and great grandbabies.