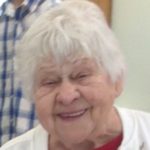 She was born the daughter of Sherman Earl and Esther Armenta (Woodard) Pollock at Urbana, Illinois on May 18, 1924. She met her husband, Glen Marion Wiley, in Pekin, Illinois and they married on Sunday, June 8, 1941, at the family farm of his parents, George and Lizzie (Chambers) Wiley, in Gorin. He preceded her in death on August 3, 1985.

Bette confessed to knowing Jesus Christ as her Lord and personal Savior at the tender age of eight and was always willing to testify of her faith and life-long relationship with God. She was a member of the Gorin Christian Church for 76 years and the Eastern Star for 65 years and 11 months where she served as Worthy Matron of Gorin chapter #139 in 1955 and several years as the Star Point of Martha of Rutledge chapter #343.

Glen and Bette were pioneers in the advancement of aviation in Scotland County. Glen, Bette, and Gary were charter members of the Missouri chapter of the International Flying Farmers and each held state offices. Bette had the distinction of writing their theme song in 1958 which is still being sung at Flying Farmer meetings and conventions worldwide. The Missouri chapter named her Mother of the Year in 1968 and Women of the Year in 1993. Together they were hosts to Wiley’s Annual Flying Farmer Fly-in at Wiley’s Airstrip in Gorin for 39 years.

Bette studied for two years at the International College of Applied Kinesiology in Dearborn, Michigan, becoming personal assistant to Dr. K.E. Kirchner, a chiropractor in Kahoka, Missouri from 1975 until her retirement in 1987.

In later years, she authored “Our Miss Ella,” a biography of the late giantess, Miss Ella K. Ewing and wrote a weekly inspirational column for the Memphis Democrat entitled “The Old Timers”.

She was preceded in death by her husband, Glen; their daughter Marian Jane; son Gary Wayne, her parents, four brothers, and two sisters.

Funeral services were held March 17, at the funeral home with Rev. Robert Harrison officiating. Burial was in the Gorin Cemetery.