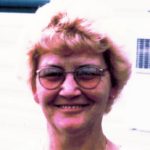 She was born the daughter of Cecil Mac and Elizabeth Jane (Ludington) Albert on November 29, 1949 in Monmouth, IL.

Barbara married Terry Johnson at Burlington, IA on November 29, 1997.   He survives.  They have resided in the Bible Grove area for the last 15 years.

Barbara enjoyed bingo, camping, fishing and cooking. But most of all, she enjoyed spending time with her family.

She was also a member of the Eagles Club in Illinois.

She was preceded in death by her parents, Cecil and Libby Albert, and one brother, Marshall Albert.

Funeral services will be held on Saturday, December 16, 2017, at 11 a.m. in the Gerth Funeral Chapel in Memphis, MO with Brother Larry Smith officiating. Visitation will precede the service from 9 a.m. until 11 a.m.