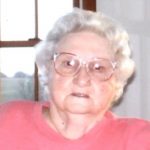 She was born the daughter of Peter Gordon and Eva Myrtle (Saulsbury) Garrett on March 8, 1927 at Downing, MO.

Wilma lived in Memphis for a great deal of her life.

She was a great cook and worked for several restaurants in Memphis and Lancaster, along with Rock Island, IL, — where she and Floyd resided for a few years.  She loved to play cards and to go fishing.

Wilma loved to celebrate the birthdays of family and friends, making the meal and cake.  She will be sadly missed by all who knew her.

Funeral services will be held at 2 p.m. on Saturday, July 7, at the Gerth Funeral Chapel in Memphis with Larry Smith, pastor of the Downing Christian Church officiating.   A private family burial will be in the Campground Cemetery, south of Downing.

Visitation is prior to the service on Saturday, from noon until 2 p.m. at the funeral home.

Memorials are suggested to the American Diabetes Association and may be left at or mailed to the Gerth Funeral Service, 115 S. Main St., Memphis, MO 63555