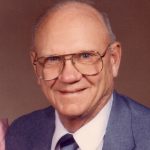 He was born the son of Constantine T. and Cora Jane (Ledbetter) Coffrin on September 16, 1923 in Hartshorne, OK.   Bill was lovingly raised by T.P. and Ethel Coffrin.

Bill was a member of the Future Farmers of America during high school.  He lettered in softball in 1940-41, and graduated from the Memphis High School on May 22, 1941.

Bill married the lovely Lola Verlene Robinson on September 5, 1942 in Gorin at the Methodist parsonage, with the Rev. Arthur L. Huff officiating.   Bill often commented that he married the smartest, most beautiful girl he had ever met.  They celebrated their 70th wedding anniversary on September 5, 2012.

The Coffrins were blessed with one son, Kenneth William Coffrin, on April 15, 1944.   Kenny was a tiny tike at four pounds, eight and a quarter ounces.   Kenny was baptized at the McAdow United Presbyterian Church in rural Scotland County on April 10, 1960.

Bill joined the United States Navy on February 6, 1943.  He completed his basic training in Farragut, Idaho.  During World War II, Bill was a naval officer serving in Company 157, Regiment 2 Battalion 6 in New Guinea in the South Pacific.  Bill was a member of the Naval Hospital Corps, responsible for the rescue and rehabilitation of injured soldiers fighting the Imperial Japanese Navy.

He was discharged from active duty on November 29, 1945 and was awarded the Victory Medal American Area Asiatic Pacific.

He received a letter on December 18, 1945 from the United States Secretary of the Navy, James Forrestal, complimenting Bill on his valor under duress.   Secretary Forrestal wrote, “no other Navy at any time has done so much and you have had the honor for serving in the greatest Navy in the world.”

Bill farmed in northwest Scotland County for more than 40 years.  After his retirement, he turned his attention to woodworking.   Bill was a master carpenter, but more importantly he loved creating unique works of art.   Many hours were spent designing tables, benches and wooden hot pads or three legged stools.  Some of his finest works are throughout the homes of his friends across Missouri.   Those who knew Bill understood and appreciated his fondness and love for beautiful red cardinals.   Bill combined his love for the birds and his woodworking by making red windmill cardinals often seen in the Coffrin’s front yard.   Bill and Lola enjoyed searching for and collecting geodes.  These bright, sparkling, crystalline rocks in various sizes surrounded their Memphis home.

Bill served on the University of Missouri Scotland County Extension Council for many years.  He was a Scotland County Commissioner from January 1985-89.   Bill was a member of the MFA board of directors in Memphis from 1968-85.   He was a member of the Pleasant Grove United Presbyterian Church, where he was elected and installed as a ruling elder on January 20, 1974.  Upon the closing of Pleasant Grove, Bill transferred  his affiliation to the First Presbyterian Church in Memphis.

He was preceded in death by his son, Kenneth William “Kenny Bill” on July 11, 2011; a sister, Winnie; four brothers, Dick, David, Fred and Rex Coffrin.

He is survived by his loving wife, Lola.

Memorials are suggested to the Memphis First Presbyterian Church and can be left at or mailed to the Gerth Funeral Service, 115 S. Main St., Memphis, MO 63555.