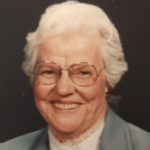 Virginia Lorene Barton, 93, of Memphis died Friday, May 15, 2020 at the Scotland County Care Center in Memphis.

She was born the daughter of Warren R. and Nadine (Cooperrider) Buffington on June 1, 1926 in Perry, MO.

Virginia worked at the garment factory in Vandalia, MO, until she met Murl J. Barton. They married on January 8, 1949. He preceded her in death on October 16, 2001.

She was a homemaker who devoted her life to her family. She was a wonderful cook and talented seamstress. Her daughters and granddaughters were blessed to have her make their prom and wedding dresses.

Virginia was a member of the Downing Baptist Church. She was an active church member until her health would not permit it.
She was preceded in death by her husband; parents; a daughter, Majorie Ellen Maher; brothers: Cyrus, Clarence, David, Paul, Leo, Lloyd and Warren; sisters: Della Street, Eva Parks, Sarah Robinson, Gladys Dry and Twila Baker.