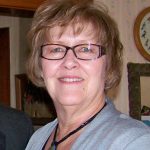 Vicki married Lester Clark on July 24, 1976 at the old Baptist Church in Memphis. He survives.

Her grandchildren were very special to “Nana.” She was a generous soul who had a special flare for making any occasion very special. In her youth, she enjoyed barrel racing and was a member of the Bar-B-Saddle club in Bible Grove. Vicki enjoyed children’s tea parties, gardening, decorating, antiquing, shopping and was the best cook ever. The Clark’s liked spending time at the family lake, and Vicki was an avid water skier. She and Lester owned the Villa in Memphis, the Cheese Post in Downing, and she worked for many years at Morgan Fertilizer and the Farmers & Merchants Bank in Memphis.

She was preceded in death by her parents and father-in-law, Emery Clark.

She is survived by her husband, Lester of the home; daughter, Dana Poole Dinkel and husband John of Kirksville; son, Rob Poole of Kirksville; step-son Brian and wife Kiersten Clark of Wagoner, OK; a special step daughter that she considered her own, Julie (Clark) Arnold and husband Cody of Memphis; brother, Davis and wife Melinda Burrus of Memphis; mother-in-law, Dorothy Clark of Rutledge; sister-in-law Kathie McPherson and husband John of Burlington, IA; brother-in-law Larry Clark and wife Kim of Gorin; nine grandchildren; several nieces and nephews that she considered very special; and a host of friends.

Funeral services will be at 11 a.m., Wednesday, May 14, at the First Baptist Church in Memphis with the Pastor Dan Hite officiating. Burial will be in the Memphis Cemetery.

Visitation is from noon until 8 p.m., Tuesday May 13, at the Gerth Funeral Home in Memphis with the family greeting friends from 6-8 p.m.

Memorials are suggested to the Schuyler County Cancer Relief Fund, Hospice of Northeast Missouri, and the Downing House.