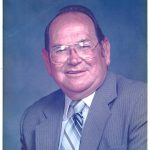 He married the former Dotolene Fetters on October 28, 1947 in Peoria, IL. She survives.

The Yoders settled in Peoria, IL, where Vernon worked as a bookkeeper at Schwabs Dairy from 1947-55. They then moved to Arbela where they owned Yoder’s Trading Post until 1961 when they moved to Memphis and Vernon started working as a teller at the Farmers and Merchants Bank. In 1971 he went to work as a loan officer at the Mercantile Bank, from where he retired as the Executive Vice President in 1989.

In his free time, Vernon enjoyed golfing, gardening, playing cards with friends, and antiquing. He often assisted people in filing their income tax statements and clerked at auctions. He especially liked spending time with his family and friends.

Funeral services will be held at 1 p.m., Saturday, May 31 at the Memphis United Methodist Church with Rev. Paul Smith officiating. Burial will be in the Memphis Cemetery.

Visitation is from noon until 8 p.m., Friday, May 30 at the Gerth Funeral Home in Memphis with the family greeting friends from 6-8 p.m.