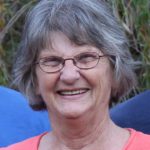 Prior to the Service
10-11 a.m.
Friday, Sept. 29
Wyaconda Christian Church

She was born the daughter of Eric L. and Della Mae (Parker) Reeser in Louisville, KY on November 23, 1937.   Sue was a 1954 graduate of the West Point (KY) High School and a graduate of the 1959 Nursing Class from the St. Anthony School of Nursing.

The Murphys moved to Missouri and settled on the family farm, south of Wyaconda.   Sue worked as a nurse at St. Joseph Hospital in Keokuk and at the Clark County and Scotland County Health Departments before moving to Columbia to work as a nurse first at the Harry S. Truman Memorial Veteran’s Hospital and then part-time as a nurse at Boone County Hospital, until her retirement.

She enjoyed gardening, her flowers and tending to her yard.   Sue played online games to keep her mind sharp.   She was a woman of faith and spent time studying the Word.   You could find her prayers and notes taped to walls and mirrors around her home.

Sue treasured spending time with her family, especially at Thanksgiving and July 4th gatherings.   She will always be remembered for her home-made egg nog, ice cream and candies that she shared every Thanksgiving.

She was preceded in death by her husband; parents; in-laws, James and Nettie Murphy; a sister-in-law, Faylene Murphy; and a brother-in-law, Robert Morris.