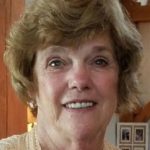 She was born the daughter of Dorsey Leon and Edna Irene (Spray) Swearingen on September 20, 1947 in Bible Grove, MO.

Shirley graduated from nursing school and was an LPN for 50 years. She worked at Scotland County Memorial Hospital, KOH in Kirksville, Pathways and Heritage Park in Rolla. She also served as the office manager for Satterly Orthopedics. Shirley belonged to the Rolla First Christian Church and was a member of the Rolla Breakfast Kiwanis Club for many years. She volunteered at the middle school library in Rolla as a tutor.

Her children described her as a “bleacher Mom” who always attended their’s and her grandchildren’s athletic, academic and dance events. She was the videographer for Rolla High School Football for many seasons.

Shirley enjoyed spending time in her flower beds, cooking and baking, and loved her dogs.  She was a world traveler, including visiting London, Paris and Switzerland in Europe and touring Australia.

She was preceded in death by her parents.

Funeral services will be held Saturday, February 10, at the Gerth Funeral Chapel with Pastor Tim Cook officiating. Burial will be in the Greensburg Cemetery.

Visitation is from 12-7 p.m., Friday, February 9 at the Gerth Funeral Home with the family greeting friends from 5-7 p.m.