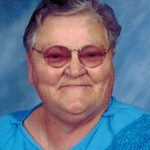 She was born near Downing on September 11, 1935 to Roy Russell and Margaret Kathleen Blessing Buford.  She lost her mother at the age of 2 months and was raised by her aunt, Cleo Zaerr, until she was 6 years old and returned to her father’s home. Roberta never forgot the love she and Cleo shared and they continued to spend time together.   She returned the care she had received as a child as Cleo grew older and needed care herself.

Roberta married Vancel Dean Small on June 23, 1951, and to this union 10 children were born, including a still-born daughter.

She was an excellent housewife and mother — a hard worker who was known for her excellent cooking, sewing, and gardening skills.  She enjoyed crocheting, bird watching, her rock garden, and old-time country music. Roberta was a member of the Memphis First Christian Church and looked forward to receiving communion in her home on Sundays. Most of all she loved and enjoyed her children and grand-children, looking forward to each new birth. She kept a calendar of their birthdays and proudly wished them all a happy birthday on KMEM radio.

She is survived by nine children.  Randy and Connie Small of Bloomfield Iowa, Jesse and Vicky Small of Arbela, Dale and Dixie Small of Alexandria, Leanna Holdren of Baring, Jody Small and Lisa Preece of Memphis, Buffy and Patrick Bell of Memphis, Bobby and Shelley Small of Memphis, Angel and Kerry Arnold of Memphis, and John and Tonya Small of Memphis. She is also survived by 42 grand-children and 48 great grand- children, her sister Juanita Buford Cox of Fort Worth Texas, and her half- brother Danny Buford of Downing MO, as well as a host of nieces and nephews.

A memorial visitation will be held from 6-8 p.m., Monday, April 24 at the Gerth Funeral Home in Memphis.

Memorials are suggested to the Memphis First Christian Church.