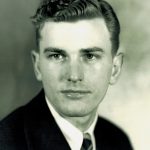 Rolland Andrews, 91, of Milton died December 20, 2016 at the Scotland County Hospital in Memphis.

Rolland was born March 22, 1925 to Ray Burnside and Josie Pearl (Franklin) Andrews in Flemington, MO. He was one of nine children.

Rolland received his early education at the Flemington elementary school and the Sunnyslope country school. In the spring of 1944 he graduated from the Humansville, Missouri high school.

Rolland entered the U.S.Navy in the fall of 1944. He served his country in this capacity until he was discharged in 1946. After his discharge, Rolland settled in Milton, Iowa where he went to work for his brother, Carl Andrews.

He was united in marriage to Crystal Bickel in 1947. To this union three children were born: Terry J., Alan J. and Carol A. Joining this family in 1971 was two year old Chadlin L., who was later adopted by Rolland and Crystal.

Rolland spent several years learning the plumbing business with his brother, Carl. With this experience, he was able to later find employment with Sears and Roebuck Company in Ottumwa. He worked in their service department until he was promoted to manager of the Ottumwa Farm Store. From this position, Rolland returned to Milton where he bought the Plumbing and Heating business from his brother.

On August 2, 1981, Rolland married Mary Anna Vizy. She and Rolland continued operating the Andrews Plumbing and Heating business until 1990.

Rolland’s interest in antique cars led his to his next business endeavor. He and Mary Anna opened and operated M&R Automotive until they retired.

Rolland’s greatest joy came forth when he renewed his interest in music. At age 68 years, he started playing the tenor banjo with the Milton Heritage Band. As time passed, he graduated to the dog-house bass and other instruments. When the Milton Heritage Band discontinued, Rolland and Mary Anna joined musical talents with Donna McDaniel (accordion) and continued playing music for a number of years.

Rolland was a longtime member of the Grace United Methodist Church in Milton, serving in many capacities. He also served on the town council and was always concerned and helpful with town activities as long as he was able. For twelve years he portrayed “James the Lesser” in the Last Supper Dramatization as presented by the Van Buren co-op ministry.

Rolland was a member of the American Legion Post 0483 and the Celestial Lodge 413 of Douds, Iowa.

A highlight for Rolland for many years was being together with his family for Thanksgiving dinner in Milton.

Funeral services will be held on Tuesday, December 27, 2016 at 2 p.m. in the Gerth Funeral Chapel in Memphis with Pastor Mary Kathryn Hart officiating. Special music will be provided by Kayla Lewis.

Visitation will be held on Tuesday, December 27th from noon until the time of service at 2 p.m. in the Gerth Funeral Chapel.

Memorials are suggested to the American Legion Post 0483 in Milton, IA or to St. Jude’s Childrens Hospital.