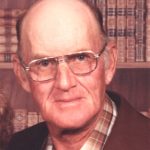 Gravesite services for Richard R. Ferguson, 94, of rural Memphis, MO, will be held on Thursday, May 31, 2012, at 10 a.m. in the Memphis Cemetery. Reverend Charles Hammack will officiate. Military rites will be conducted by the Wallace W. Gillespie Memorial Post #4958 of Memphis.

Richard R. Ferguson passed away Sunday morning, May 27th, at the Scotland County Hospital in Memphis.

Registry hours will be held on Tuesday, May 29th and Wednesday, May 30th, from 9 a.m. until 5 p.m. in the Gerth Funeral Chapel in Memphis. There will be no public visitation per Richard’s request.

Memorials are suggested to the First Christian Church in Memphis and may be left at or mailed to Gerth Funeral Service, 115 S. Main, Memphis, MO 63555.

Arrangements are under the direction of Gerth Funeral Service from their Memphis chapel.