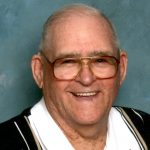 The son of Richard Julian and Edna Berniece (Eslinger) Lantz, he was born February 27, 1931, in Brooklyn, IL. He graduated from Macomb High School in June 1950.

Richard farmed with his father in Macomb, IL.  Their land produced 72 bushels per acre of wheat in a nine acre tract.

In 1974 he and Vivian moved to Wyaconda, MO, where he farmed and raised livestock. Following Vivian’s death September 14, 2008, he moved to Memphis to be closer to his daughter and granddaughters.

Richard attended the First Baptist Church in Memphis. He was also a member of the Wallace W. Gillespie Memorial Post #4958 of Memphis, the American Legion and the Elks Club of Macomb, IL. Hunting and fishing were also enjoyed by Richard.

Preceding him in death were his wife, Vivian; stepson, Ronald Paul; three children in infancy; and sister, Sara Lou Carlburg.

Survivors include his wife, Mildred Lantz of the home; one daughter, Sonia and husband Roger Kaldenberg of Memphis;  two stepsons, Gene Paul and wife Penny of Wyaconda and Lindal Paul and wife Mary of Ellisville, IL;  brother, James M. Lantz and wife Ann of Macomb, IL; and several grandchildren and greatgrandchildren.

Funeral services will be held on Wednesday, January 23 at 2:00 p.m. in the Gerth Funeral Chapel in Memphis with Pastor Dan Hite officiating. Burial will be in the Memphis Cemetery with military gravesite rites conducted by the Wallace W. Gillespie Memorial Post #4958 of Memphis.

Visitation will be held on Tuesday, January 22 from 3-8 p.m. in the Gerth Funeral Chapel in Memphis with the family meeting with friends from 6-8 p.m.