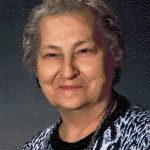 She was born the daughter of Vernie Boyd and Rue Mina (Corwin) Phillips on September 24, 1933 in Bible Grove.

She worked at Schaffer Pen Factory for a time after high school. She married Carroll Kittle, the love of her life, on June 20, 1954 at the Memphis United Methodist Church by the Rev. Longstrom. He preceded her in death on September 29, 2007.

Four children were born to this union.

Reta joined the Bible Grove Church of Christ at an early age, but attended the Arbela United Methodist Church while raising her family.

The Kittles farmed in rural Arbela and Reta was a homemaker until retirement.

Reta was a loving and devoted wife, mother and grandmother. Her first love was Carroll and family. She enjoyed working on the farm, gardening, canning, spending time with her grandchildren, and attending their activities. She always looked forward to spring and the beginnings of new life, but most of all Reta just liked being with Carroll and her family.
She was a member of the Greensburg order of the Eastern Star #258, which in 2000 consolidated with Colony #543.

Funeral services will be held at 10 a.m., Saturday, April 1, at the chapel in Memphis with Pastors Nate Frazee and Homer Poor officiating. Burial will be in the Memphis Cemetery.

Visitation is from 2-8 p.m., Friday, April 1, at the funeral home with the family present from 6-8 p.m. An Eastern Star Ceremony will be performed by the Colony Chapter #543 at 7 p.m.

Memorials are suggested to the Arbela United Methodist Church and can be left at or mailed to the funeral home.