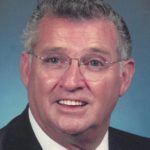 He was born April 14, 1940 in Laconia, NH to Clyde D. Blake and Gladys E. (Grant) Blake. He was born into a large family whose brothers and sisters loved him. He worked in Laconia, NH for a foundry, boot factory and a stocking factory. Raymond moved to Dallas and worked for WATCO Manufacturing. He also lived in Bowie, TX where he managed an apartment complex.

He met and married Norma Jeane Heisterberg in 2001.

Raymond and Norma attended the Church of the Nazarene in both Gatesville and Hillsboro. Raymond’s home away from home was his shop. He loved fixing things for folks and making fanciful sculptures. He was what is called an “Outsider Artist”, as folks could tell he thought outside the box.

Raymond was saved late in life, but it is never too late in the eyes of the Lord. He loved his Jesus and was ready to go home. He is very happy and having a blast.