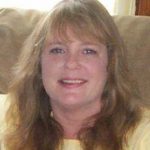 The Thomsons enjoyed traveling together while he was a journeyman iron worker for local #10 in Kansas City.   They moved to Memphis after Michael retired.    She was an active member of AA and attended the Memphis United Methodist Church.

She enjoyed traveling and the great outdoors.   Her favorite place was the beach.   Paula spent most of her time with her beloved fur babies — Bandit, Trouble and Casey – along with anyone else’s pet who she came across.   She was very active, finding motivation in swimming, gardening, and working out.   Paula enjoyed shopping with her dearest friends and barely knew a stranger.

She was preceded in death by her husband, parents, and a sister, Pamela Sue Kelly.

She is survived by an uncle, Mark Kelly of Michigan, and many cousins and close friends.

A memorial service will be held at 2 p.m., Saturday, September 19 at the Gerth Funeral Chapel with Jack Sumption, pastor of the Memphis First Christian Church, officiating.

Visitation is scheduled for 1-2 p.m., prior to the service on Saturday, at the Gerth Funeral Home.

Memorials are suggested to the Paula A. Thomson fund.