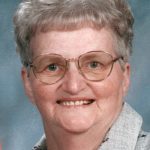 She was born the daughter of Carl Rex and Bessy Opal (Couch) Olson on August 28, 1935 in Wyaconda.

She was preceded in death by her husband; parents; a sister, Mary Frances Olson; brother, Carl Kenneth Olson; a niece and a granddaughter.

Funeral services will be held at 10:30 a.m., Friday, April 21 at the Memphis United Methodist Church with Rev. Carol Ann Blackwell officiating.   Burial will be in the Memphis Cemetery.

Visitation is from 12-8 p.m., Thursday, April 20, at the Gerth Funeral Home with family greeting friends from 6-8 p.m.

Memorials are suggested to the St. Jude’s Children Hospital or the Luekemia & Lymphoma Society.