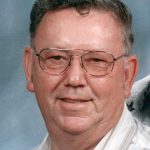 Orva Clarence West, 74, of Quincy, IL, formerly of Memphis, MO, passed away in his home at Bickford Cottage on July 21, 2012,  following a short illness with cancer.

The son of Orva O. and Marguerite (Perkins) West, he was born on August 7, 1937 in Viola, Idaho. At an early age he moved with his parents to Lineville, IA and several years later moved to Marion, IA. He graduated from Marion High School in May, 1956.

Orva was an inspector for the Iowa State Highway Commission. His work mainly included working on the construction of Interstates 80 and 35.

Orva moved to Memphis, MO, in 1976 to start and manage the Scotland County Ambulance Service until January, 1993. He drove a semi for Vermillion Brothers from 1993 until 1999. He then became semi-retired, delivering fertilizer in the spring and fall for MFA.

Orva enjoyed woodworking and made beautiful things for their home and his grandchildren and great grandchildren. Each grandchild had a cradle, a toybox, and many other things.

Orva’s favorite pastimes were woodworking, jigsaw puzzles, riding his scooter, and drinking coffee with the gang at the Antique Building. He was well liked and respected by all who knew him.

Orva was a member of the United Methodist Church in Memphis, MO.

Funeral services will be held on Wednesday, July 25, 2012, at 10:30 a.m. in the United Methodist Church in Memphis with Pastor David Howlett and Pastor Carol Blackwell officiating. Burial will be in the Memphis Cemetery.

In lieu of flowers, memorials have been suggested to St. Jude’s Children Hospital, to the Scotland County Nutrition Site, or to the United Methodist Church in Memphis and may be left at or mailed to Gerth Funeral Service, 115 S. Main, Memphis, MO 63555.