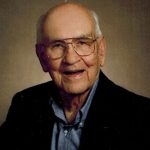 He was born the son of Jesse Lindsey and Addie M. (Jennings) Armstrong on August 25, 1922 in Bible Grove. He attended schools in Scotland County.

Ora served his country in World War II by joining the Army of the United States. He was in North Africa and Italy and was awarded a European African Middle Eastern Theater Campaign Ribbon, five oversees bars, and a Victory Ribbon for his service.

He married the former Irene V. Vincent on August 13, 1950 at the Lancaster Baptist Church. She survives.

Ora built the home that he and Irene raised their family in. He was a rural letter carrier for 46 years before retiring in 1989. He also worked at Armstrong – Templeman in Memphis building AV equipment.

For many years he was the Secretary/Treasurer for the Memphis United Methodist Church and served on the H.U.D. Housing board for 13 years.

Ora and Irene enjoyed playing cards with friends and he often played pool at Memphis Recreation Center. They wintered in Texas for 24 years following his retirement.

He was preceded in death by his parents; a brother, Ava, in 1938; and a sister, Eva Hanley.

He is survived by his wife, Irene, of the home; sons, Philip and wife Mary Armstrong of Arlington, TN, and Randy Armstrong of Cordova, TN; daughter, Linda and husband Larry Kleinmeyer of Swisher, IA; grandchildren, Nicolas Armstrong, Amanda and husband Jerry Gonzales, Jeremy and Jade Alford; a great-grandson, Marco Gonzales; a nephew, Hollis and wife Sarah Hanley of Memphis; several cousins and many friends.