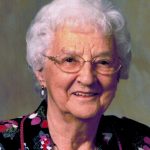 She was born March 3, 1925 in Scotland County, the daughter of Elmer Milton Wright and Addie Agnes (Roberts) Wright. Opal graduated from Bible Grove High School in 1942.

The couple owned a farm near Bible Grove. Opal was a member of the Bible Grove Christian Church and was very active in community affairs.

In addition to her work as a wife and mother, Opal was renowned as a professional cook. She served as head cook of Grim-Smith Hospital, Scotland County Care Center and the Scotland County Livestock Auction Company. Opal was also an avid gardener and a fine seamstress.

Opal was preceded in death by her parents; husband; and six brothers and sisters.