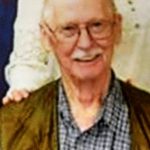 Noah Clatt was born on July 5, 1921 in Scotland County, Missouri, the youngest son of John Henry and Ella (Fehr) Clatt. He outlived his brother and sisters.

He graduated from eighth grade and two days later he went to live with his sister, Lydia Blain, due to passing of his parents – first his father in 1934 and then his mother in 1935.

Noah farmed for several years before being drafted into the Army on June 11, 1942. He was a mechanic in the 474th Engineer maintenance company until he was discharged on December 6, 1945. For his service, Noah was entitled to wear the European African Middle Eastern Theater Campaign Ribbon, 5 oversees service bars and a Victory Ribbon. In April of 2012, Noah took an honor flight escorted by his son Charles to Washington D.C. to see the World War II monument.

After farming for several years in Scotland County, Noah moved the family to Canton in 1957. He worked throughout the years at various jobs, one being at Standard Machine. He was employed at Lock & Dam 20 for several years, retiring from the Corps of Engineers in April 1987. Noah and Charlene then moved back to Memphis.

He is survived by his sons, Charles Henry Clatt and wife Nonda of Monroe City, MO, Noah Dennis Clatt and wife Connie of Moncks Corner, SC, and Paul Richard Clatt of Canyon, TX; nine grandchildren and 19 great grandchildren (with one on the way!); a special friend, Bea Reaves of Memphis.

Funeral services will be at 11 a.m., Thursday, April 2, 2015 at the Gerth Funeral Chapel in Memphis with the Rev. Robert C. Moseley, pastor of the Arbela Baptist Church officiating. Burial will be in the Gorin Cemetery. Military rites will be conducted by the Wallace W. Gillespie Memorial V.F.W. Post #4958 of Memphis.

Visitation is from noon until 8 p.m., Wednesday, April 1, at the Gerth Funeral Home in Memphis with the family greeting friends from 6-8 p.m.

Memorials are suggested to the Scotland County Senior Nutrition Center and may be left at or mailed to the funeral home.