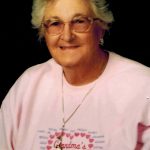 The daughter of Harvey Harold and Audrey Oletha (Russell) Sedore, she was born on April 18, 1926, in Milton, IA.

She also enjoyed sewing, gardening and playing cards. Most of all, she enjoyed spending time with her family. Nettie professed her faith early in life.

She was preceded in death by her husband; parents; two sisters, Ethelyn and Pearl; and two brothers, Russell and Doyle.

Funeral services will be held on Sunday, April 6, 2014, at 10 a.m. in the Gerth Funeral Chapel in Memphis with Leland Hyde officiating. Burial will be in Sunnyside Cemetery in Milton, IA.

The family requests that memorials be made to the family and may be left at or mailed to Gerth Funeral Service, 115 S. Main, Memphis, MO 63555.