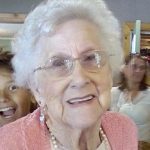 She was born the daughter of Garland and Laura (Witt) Trent on June 4, 1925, in Rutledge.

Mona graduated from Memphis High School in 1942 and taught the next five years in country schools, attending Northeast Missouri State Teachers College (now Truman State University) during the summer while teaching in the winters.

She worked for 15 years at the former Shellor Globe in Keokuk.

Mona served as Mayor and as an alderman for the city of Gorin.   She belonged to and held the office of Regent in the Jauflione Chapter DAR in Memphis; was chairperson of the American Legion Auxiliary; member of the LICA Auxiliary; treasurer of the Gorin Cemetery Board; secretary of the Gorin Senior Housing Board; was member of the Scotland County Democratic Party, the Wyaconda Lions Club, the Rutledge Renegades, the Red Hat Society in Memphis and Rutledge, and volunteered at the Downing House Museum.

Funeral services will be at 11 a.m., Friday, October 7, at the Gerth Funeral Chapel in Memphis with Jim Campbell, pastor of the Kahoka Christian Church officiating.   Burial will be in the Pauline Cemetery in Rutledge.

Visitation is from 12-7 p.m., Thursday, October 6, at the Gerth Funeral Home with family greeting friends from 5-7 p.m.

Memorials are suggested to Blessing Hospice or the Downing House Museum.