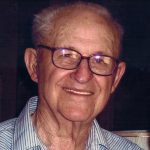 He was born February 28, 1918, on a family farm west of Greensburg, MO, to Bert and Donna (Evans) Slocum. Max attended school at Bible Grove, MO, and after graduating he attended a school in Rolla, MO where he learned tool and die. He worked at Curtis Wright in St. Louis, MO, before entering the United States Navy.

He was honorably discharged after serving for two and a half years during World War II.

To this union five children were born: a daughter, Marilyn ; two sons, Mark and Michael; and twin daughters who died in infancy.

Max operated a radiator-small engine business in Memphis for twenty-five years. He had a gift of fixing almost anything. He enjoyed working in wood, making furniture and clocks.

At an early age he became a member of the Pleasant Ridge Christian Church.

He was a good father and grandfather.

Registry hours with viewing will be held on Wednesday, December 17, 2014 from 9 a.m. until 5 p.m. in the Gerth Funeral Chapel in Memphis. Private family services will be held a later time.

Per his wishes, he will be cremated with inurnment in the Pleasant Ridge Cemetery in Greensburg, MO.

Memorials in memory of Max S. Slocum may be made to Hospice of Northeast Missouri and left at or mailed to Gerth Funeral Service, 115 S. Main, Memphis, MO 63555.