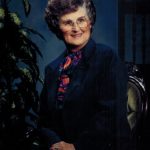 She was born the daughter of John and Mabel (Moore) Phillips on May 29, 1930 in Granger.

Upon graduating from Granger High School, Mary received her degree in education from Northeast Missouri State Teacher’s College (now Truman State University) in Kirksville. There she met and dated Richard Burl Abernethy. They were married on December 19, 1948 at the Prairie View Church in Scotland County. He preceded her in death on May 24, 1985.

The Abernethy’s moved to Danville, IA, where Mary taught English and Home Economics. They then purchased a farm in Cantril. She was Richard’s secretary at the Horace Mann Insurance Agency where they provided financial planning for teachers. Following Richard’s death, Mary continued to operate the agency for seven years.

After her retirement, Mary moved to Cedar Rapids, IA, to be closer to her son.

Mary was a member of the Eastern Star in Cantril and the Methodist Church. She loved playing piano and gardening.

She was preceded in death by her husband; parents; brothers and sisters.

She is survived by her daughter, Rita of Muscatine; her son, Richard of Cedar Rapids; her granddaughter, Andrea of Kansas City, Missouri; her sister-in-law, June Helsel of Cantril.

A gathering of family and friends was held on Monday, December 29, 2014 at the Gerth Funeral Chapel in Memphis. Burial was in the Prairie View Cemetery in Scotland County, MO.

Memorials are suggested to the Prairie View Cemetery.