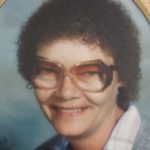 Charity or Organization of the Donors Choice

Mary Carol Downing, 77, of Memphis, died Friday, September 27, 2019 at her home with family and friends.

She was born the daughter of W. Harold and Violet Irene (Asher) Murphy on October 11, 1941 in Kirksville. Phillip Pinkerton was Mary’s stepfather in her early teens. The family included Mary, her brother, Gary Murphy, stepsisters, Linda and Ellen, and stepbrother, Ronie.

Mary was educated in the Kirksville schools.

She received salvation with Jesus as her savior, accepting God as her savior during her childhood. She was baptized at the Southside Baptist Church by Pastor Cyrus Davis in the Chariton River west of Kirksville. Mary always liked Genesis chapter 1, “In the beginning God created the Heaven and the Earth with life.”

She was married to Charles “Chick” Downing on August 8, 1970 at Bible Grove by Terry Hunt. Chick and Mary, along with Jerry and Tammy, resided in Memphis for 49 years of marriage with God’s help. Mary was a textile factory worker in Mississippi, Kirksville and Memphis as well as a nurse’s helper and waitress. She was one of the best wives.

Mary enjoyed her family, reunions, camping, fishing, vacation and just spending time together, especially going to church with her brother and sister. She enjoyed her brother Gene, and his son Dave, bringing God’s message on Sunday. Mary enjoyed going to the Bonaparte restaurant and having the house special drink and shrimp. Conway Twitty was her favorite singer. She like to play cards with Roger and Noralyn Armstrong and their children.

She was preceded in death by her parents; step father; brothers David Pinkerton and Gary Murphy; a sister, Roberta (Pinkerton) Morris; a son, Jerry Chuites.