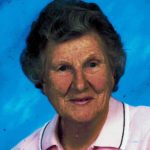 She was born the daughter of James Raymond and Mary Mae “Molly” (Shelton) Ware on March 31, 1924 in Parma, Idaho in Canyon County – the eighth of nine children.

Marjorie attended the Island School in Parma. She moved to Memphis in February of 1948 to make her life and married Malcolm Earl Peterson on July 25, 1948 at the First Christian Church. He preceded her in death on May 24, 1989.

The Petersons had a farm south of Memphis where they farmed and raised crops, hogs and cattle until his death. Marjorie stayed on the farm as long as she was able.

She was baptized into Christ in the early 1950s, and served many things for the church including teaching Sunday School for 25 years. Marjorie worked in extension for a number of years as a food leader and with 4H for many things. She also served as an election delegate for the Rutledge area and was a member of the Red Hat Society in Rutledge.

She was preceded in death by her husband, parents, four sisters and three brothers.

She is survived by her sister Marie Henley of Caldwell, Idaho; a number of nieces and nephews including Mike (Jeanie) Drummond of Memphis; great nieces and great nephews; cousins and many friends.

Funeral services are scheduled for 11 a.m., Wednesday, December 12 at the Gerth Funeral Chapel in Memphis with burial in the Memphis Cemetery. Jack Sumption, pastor of the Memphis First Christian Church is officiating. Visitation is one hour prior to the service on Wednesday morning.